A lot of people have concerns about putting their dogs in a crate at night.

They worry that it will be uncomfortable and that the dog might get anxious.

When in fact, using a crate is a safe, stable, and familiar place for dogs to be at night. It should not be used as a form of punishment.

Not only that, but if you have a puppy they are less likely to chew up furniture if they stay in their crates!

If you’re still worried, try leaving some treats or toys with your pup so he can cope with being locked up for the night.

Is it cruel to crate a dog at night?

This is a question that many people ask themselves before getting a crate for their dog!

Dogs are usually crated at night to keep them from wandering and causing mischief around the house. But Is it cruel? In short, No!.

However, there are arguments for both sides of this debate! For example, If your dog is left in a crate for hours on end in the day and again throughout the night then Yes! absolutely!

You see! Leaving your dog in a crate for hours on end can cause anxiety and depression- which goes against everything that we love about our furry friends!

With that said, If you do decide to crate your dog at night then you should make sure that your pooch can roam around during the day!

If your someone who works in the day then you should consider using dog guards or let them roam in the garden while you are out.

Just make sure they have access to plenty of water!

If your pet gets anxious in their crates then it may not be the best idea to leave them in there all night. At least not until they are trained!

So at the start try to make your dog as comfortable as possible by leaving the door open, putting down some blankets and toys, and encouraging your pup to go in on his own so he feels comfortable enough to do so.

Let’s face it, some dogs are not going to willingly spend all night in crates on their own.

So to keep them happy make sure that the crate is comfortable, fully stocked with water, Blankets, and somewhere quiet so they have a good night’s sleep!

The Pros Of Using A Crate For Your Dog At Night

A crate can be a great option for some dogs, and at night it is the best choice.

It can provide your dog with that sense of security they crave when left alone. Dogs love to feel safe, secure, and comfortable in their environment.

Crates are a way to do this while still being able to have control over them when you are sleeping.

But there are other reasons why crating can help your pup sleep through the entire night:

Train Your Dog To Sleep In Their Crate At Night

We all know that dog owners want the best for their furry friends. Now, how about giving them a good night’s sleep without having to worry if they’re going to wake you up in the middle of the night? Well, It turns out, it’s not too hard!

A crate is a cozy and safe place for your pup at home and following these steps listed below will help your dog feel much more comfortable in the crate which means they will be able to sleep a lot at night.

Step 1: Choose The Right Crate For Your Dog

Get a crate that is large enough for your dog to turn around in and lie down comfortably.

If you have a puppy then choose a smaller size so they don’t feel cramped after sleeping all night.

Step 2: Familiarize Your Dog With The Crate

Introduce your dog to their new crate slowly and with positive reinforcement.

Throw treats inside and let them get used to being near the crate and eventually place the crate door open but locked when they’re not looking so your pup can get used to the sight of it.

When you first bring your pet home do not place them in their crate right away. Ignore them, leave the room for a while and then come back in to reassure them that you’re still there.

Be sure to reward your puppy when he is calm around the crate so they know it’s a good thing!

Step 3: Crate Train Your Dog To Sleep All Night

Now that your puppy is used to being near/around the crate try putting him inside of it for short periods of time at first.

If he gets scared or tries to snap at you ignore his behavior but continue doing what you were doing.

Don’t give in to any negative behavior, but don’t yell either as that will make him more fearful and confused.

Let him get comfortable with the new situation and soon he’ll settle down and start sleeping!

If your dog has an accident (poop) in the crate while you’re training him, don’t punish him. Clean up the mess and try again tomorrow.

If it’s troublesome to clean out then wait until he gets older before trying this method of confinement.

At night put your puppy into his crate with a favorite toy or blanket and gently close the door.

Leave some treats by his bedside as an extra reward for being good throughout the night!

Step 4: Give Your Pup Water And Treats

When your pet is inside their crate they will likely need to go to the bathroom more often.

Take them out of the crate several times during night and praise them for being good while outside.

If you do this correctly, your dog will learn that his crate is a safe place where he can sleep and feel comfortable all night long.

He’ll be sleeping through the night in no time!

Make sure your dog has plenty of water! If using a bowl offer fresh food or treats (but not too much) just before bed so he doesn’t go right to sleep after eating (this will cause him to wake up later in the night when he’s hungry again).

Crate training can be difficult for some animals at first. Be sure to give your pet lots of positive attention and praise when they do well or if you catch them sleeping peacefully in their crate.

If the process is too hard on your little guy then try it later after finding ways to make it easier for them such as getting a smaller cage or one with soft padding inside (as long as his breathing isn’t impeded!).

Little dogs like Chihuahuas who are small enough to put into large purses and bags.

You can carry them around during the day so he feels secure while confining within 4 walls.

Is It Safe To Crate A Dog At Night?

Yes of course! As long as you supervise your pet while he’s in his crate, the cage will not harm him. “But” how can you do this if you are sleeping?

Well, there are cameras you can use for the first couple of weeks that link directly to your phone using an app this way when you wake in the night you can check and see how your dog is doing.

What about injuries? There are many injuries that can happen at night when pets aren’t supervised such as chewing on the bars of the cage or getting their paw stuck inside (the best way to avoid this is by buying a dog crate with rounded edges).

Your puppy likely whine and cry some nights until they adapt being alone at night and sleeping in their crate.

After spending some time they will most likely stop making noise once left alone in their bed all evening.

This may take several weeks or more of consistent crate training.

Where To Place The Crate

If you have multiple dogs in your household, always buy separate dog crates for own space without bothering one another.

Otherwise, place the crate at a quiet location that isn’t directly in the front door.

How Long Can A Dog Stay In A Crate night?

The maximum time a dog should be in a crate is 8 hours no more! “But” this may vary depending on the breed and size of your pet.

One advantage when crating your dog overnight is that dogs will mostly are asleep throughout the night,

so they are much quieter also less likely to wake you up with their whining!

When Should You Stop Using A Crate At Night?

Some people will use the crate every night throughout the dog life,

however, there are some that just uses to train their dog to stay put and not chew on your furniture.

As soon as you think your dog is ok sleeping at night without the crate then try it once more.

If your dog sleeps happily in their bed then it’s unlikely you will need to use the crate again.

Some dog will take longer than other to train this is normal.

Therefore it would be best if you just keep using the crate for sleep only until you are sure enough that your dog will not chew on things if you let them out.

What To Do If Your Dog Cries In The Crate?

Many dogs will cry when they are first placed in the crate at night. This is a natural reaction when left alone.

When this happens it’s important to avoid opening the crate to comfort your dog as this rewarding behavior could make it worse over time.

Most of the time, after several days (sometimes weeks) of consistent training and ignoring their whining,

They will adjust to their sleeping space and calm down for most of the night once you’ve arrived home cheerfully greet them then return them to their bed for rest!

So now you know you can create your dog overnight. But using a dog crate at night may work for some people but others may like to put their pet in another room or lock them away without the need of a dog cage.

If you are thinking about doing this then go ahead and try it out, remember that after some time they will most likely stop crying in there as soon as they see you come through the door with their favorite toy filled with yummy treats.

It’s best to do your research before leaving your dog home alone so they can get comfortable with the idea. Dogstravelguide.com is a participant in the Amazon Services LLC Associates Program, an affiliate advertising program designed to provide a means for sites to earn advertising fees by advertising and linking to Amazon. 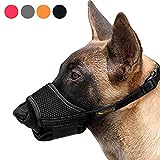 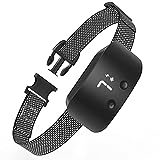